SWEET TABLE AT THE RICHELIEU

Home/SWEET TABLE AT THE RICHELIEU

SWEET TABLE AT THE RICHELIEU 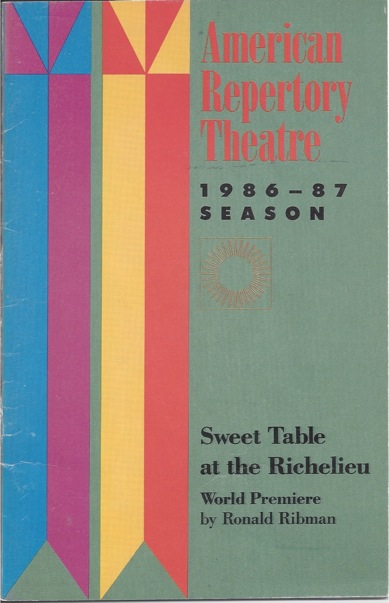 “Remarkable ‘Richelieu’ premieres at ART… Ronald Ribman’s mysterious and unsettling play…is a demanding piece of work about the casual horror of human suffering, and it’s played out in the gilded atmosphere of an Alpine spa…It is full of tantalizing thoughts about lies nurturing truth, mystery breeding belief. If some of it is inexplicable, it does make one particularly indelible point. And it is worthy of Beckett. Sliding into the lizard’s supper, at least the cricket makes a last desperate chirp. It’s not much but it’s still a cry of hope.”

“Are our pain and suffering greater than Lear’s?…Rather than focusing on one or two characters in a particularly relevant dilemma (AIDS in Fierstein’s play; war and cowardice in Fugard; the role of women in Stoppard), Ronald Ribman brings before us a roomful of 20th century decadents involved in the Decline of the West in “Sweet Table at the Richelieu.” The first play in a trilogy, ‘Sweet Table’ was premiered in February by the American Repertory Theater. It’s companion pieces, ‘The Cannibal Masque’ and ‘A Serpent’s Egg,’ are currently being performed in the company’s New Stages series. Here, on a strange shifting canvas, is a brilliant and complex assimilation of sources—from the mystical to the scientific—tracing the end of civilization with, as it turns out, a kind of thin Beckettian hope. Ribman’s three plays are filled with metaphors about voracious appetite, an appetite ready to devour confectionary sweets as well as human flesh to find satisfaction—however temporary—in a dog eat dog world.

“Much of what Ribman has to say is difficult to grasp, thickly, deliberately allusive. But there are enough clear outbursts to following the deepening course of his thought. In ‘Sweet Table’s’ first scene, a crotchety old woman takes heated issue with the failure she sees around her: ‘Elegance has gone out of the world! Order, discipline, grace! Replaced by jackasses, buffoons, nonentities. The world can drown in the sun for all that’s left of value!’ What Ribman then goes on to dramatize is the drowning itself. Gluttony mocks misery. Rape, violence, murder ridicule civility. From the midst of Ribman’s characters there develops a particular story of a woman, Jeanine Cendrars, mourning a dead child. Her sorrow becomes ‘a song in the mouth of annihilation.’ The song, by the way, is later attached to an echo in ‘A Serpent’s Egg.’ In the trilogy’s final play, a savage bully—‘Jackass, buffoon, nonentity’—falls down a mountain to his death, howling in the wind for ‘Help!’ There will be no help for the bully, but for Jeanine Cendrars there is, at least, her endurance over suffering.

“What is learned, finally, from these voices of varied intensity heard these scattered nights, is what Ribman comes to: endurance, survival, the human capacity to suffer and continue. That’s something the Greeks and Shakespeare knew, then wrapped in myths about nobility. Lacking the comfort of those myths, there may be something beyond nobility in facing into the void without promise, without applause. Estragon to Vladimir in ‘Waiting for Godot’: ‘You don’t have to look.’ Vladimir: ‘You can’t help looking.’” — Kevin Kelly, The Boston Globe

“Assessing Jeanine’s cricket-like courage, Cesare terms it ‘a stunning song. Although it suffers occasionally from obscure references, Sweet Table at the Richelieu is equally stunning.” — Jules Becker, This Week

“With its world-premiere staging of ‘Sweet Table at the Richelieu,’ ART sustains its pursuit of extraordinary theater. ‘Sweet Table’ takes the familiar, pulls back the curtain of surface appearances only to reveal the strange desperations, bizarre joys and joyful hostilities that lie deep within its characters.” — Timothy C. Morgan, Sentinal-Enterprise

“…an intriguing, surreal discourse on life and fate…Ribman mixes deep reflection with shallow posturing and outright vulgarity (in manner, not language) in startling, shifting ways that keep attention riveted to the stage…an air of foreboding that arouses imaginings in the audience beyond what the players show.” — Brian S. Mcniff, Worcester Telegraph

“Imagine yourself in the Gothic splendor of a grand old hotel somewhere in Europe. Outside the snow is falling while inside the guests gather after dinner in front of a sumptuous table covered with every imaginable dessert. But the sweetness this table promises is not reflected by the guests—a group who speak without personal censorship, their conversations peppered with insults and threats, their veneer of sensibility and etiquette shattered by verbal duels and angry insults. These people may appear civilized, but their appearances deceive…‘Sweet Table at the Richelieu’ is fascinating and never boring.” — Matt Schaeffer, WBCN

“A stunning world premiere at the ART. Long after the production ends with a midnight sleigh ride around the Alpine peaks, ‘Sweet Table at the Richelieu’ lingers in mind as a beautiful and poisoned fantasy. It is like an apple covered in gold—with the apple inside rotting. This world premiere at the A.R.T. takes place in a universe almost like the one outside your door. As a theatrical event nothing in recent memory can match it for pure imagination, for the elegance of its gestures, or for the scope of its ambition…forceful and fanciful, a work that fills the imagination.” — Joe Arena, Cambridge (Mass) Chronicle 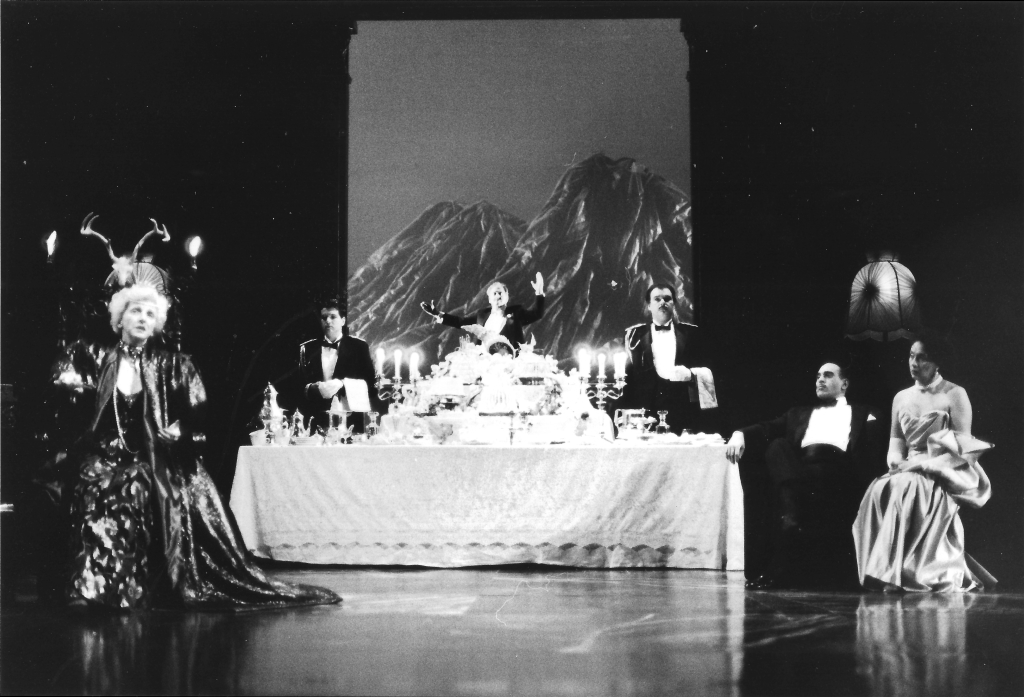 If I ever found a place I loved I would put a wall around it…keep it forever as it was…let nothing change it.

Would that were possible, signora. I have often in my thoughts cast my mind’s eye back to that first walled place, that first labyrinthine garden of God’s, and saw there only a vision of limitless horror: In the morning the sun moving across the sky in a clear voyage of light, the mists just rising from the just-created rainy wildernesses. On the savannas the lions all formed parading, the zebras whinnying, striking the excellence of earth. God’s glass bowl of time held over the earth as if glass might keep a season cloudy-fair forever, save the innocent from malice and betrayal. And then the afternoon comes moving through the mind of God. The glass lifts from the globe of earth as easily as a child might lift the bowl of a terrarium. The zebras sense it in the breath that blows the hot swarms of gathering flies; the wildebeest circling, starting, a buzzing premonition low upon them…the ibex…all the trusting innocent. In multitudinous hurt the afternoon explodes: monkeys the color of penny-red firecrackers pop in the mouths of snakes uncurling in the baobab trees; the cricket in the lizard’s mouth rubs its legs in song a final time; the ibex down in the wet idyllic grass, stunned and stunned again by the bloodied paw, while flies arrive at their own special moment of truth—licking the still open wonder of a zebra’s eye!

(To Jeanine) It’s always that way with the things we love, signora, for all things wish to remain unbetrayed in their perfection, eternal in the bright flag of their beauty. But God will not have it so. What we do not leave, leaves us. What we do not betray, betrays us. He will have it no other way.

Come, come Signor Bottivicci, continue on this way and you will sour the whipped cream in Madame Cendrars’ custard, or at the very least put Frau Von Kessel to sleep. It’s hardly God’s fault each of us must end his existence nourishing pâté in the mouth of the other.

(Suddenly, angrily pointing her cane at Cesare Bottivicci) Is that his true face, or is it some mask he has put on?

It is my true face, signora. I have no other.

The signora may find the appearance of my cousin somewhat unsettling, but I can assure her it is his true face that she sees, and that he is as incapable of speaking deceit as he is altering what he is. Therefore, I warn you be careful in what you ask him.

I ask nothing of him! I was merely startled to see such grotesquery.

Being unable to resist what I am, I have sought to find God in what I am.

You must excuse Frau Von Kessel, Signor Bottivicci. Since losing her husband, the Herr Baron, in the war, happiness has been alien to her. Is that not so, Frau Von Kessel?

I wish you to mind your own business, do you understand?

To listen to miserable little insects such as yourself discussing the great is intolerable!

Yes! The great ones of this world! The ones who control the political destiny of nations! Men like my husband, the Herr Baron. Giants whose widows you now think you can insult with impunity because they are no longer alive to protect us! I tell you better the bloodlines of this wretchedly deformed creature than a world filled with popinjays and petty functionaries such as yourself!

Really, Frau Von Kessel, it is not necessary to insult Signor Bottivicci in order to insult me. (Draining his glass of champagne) I am quite prepared to be insulted on my own. In fact I insist on it. (Gesturing to one of the servants for a refill)

Dissolute! (Rising to her feet, calling out to the servants at the sweet table) You have not given me everything I have asked for! The cherries brandied with flame, marzipan, pudding, champagne! (Whirling about and pointing her cane at Cesare again) If that man is not a complete and utter fraud like everything else that has remained in this world, let him show me his power! Let him show me the future dancing in the palm of a hand! (Taking a few steps toward Cesare, who has grown increasingly distressed by her remarks) According to her you have only to touch another’s skin to see the future. (Holding out her hand) Then touch my skin. (Imperiously) Touch my skin, Herr Charlatan, and tell me what future you see inside me!

(Goaded by her unrelenting command, Cesare rises, walks over, and suddenly covers Frau Von Kessel’s face with his hand. As soon as his hand touches her face, Frau Von Kessel gasps. Throughout the “reading” she writhes in great and obvious pain.) A wind sharper than a man’s knife to peel away your skin…flayed skin like leather…strip by strip. The wind that blows like sand, abrading, dissolving, eating away organ by organ, sliver by sliver, until only the dust of the mold in which you were formed remains…dust free of all pain, desire. Lady of Flayed Skin.

(With a shriek, Frau Von Kessel collapses to the floor. Dr. Atmos and the servants hasten to her assistance, lifting her under the arms, pulling her back to her chair. She screams at Cesare, but her speech now seems momentarily slurred as if she has had a stroke) Fraud! Charlatan! You pretend to see the future, but all you see are the natural effects of the restorative treatments I am undergoing. The tissues being regenerated, the smoothness of the texture from the injections of lamb embryo and royal jelly. Is that not so, Dr. Atmos?

(Kneeling beside her) Absolutely. You grow more beautiful every year, Frau Von Kessel. You are the envy of all your friends.

Sweets! More sweets! More cherries! More brandy! (As Frau Von Kessel lies sprawled back in her chair, unable to even sit up straight, one of the servants spreads a large napkin across her chest and Dr. Atmos begins spooning brandied cherries into her mouth. Frau Von Kessel spits the pits out onto a little plate held by the servant)